Today is Sunday and our last day in the Yukon.  Our seedy hotel turned out to be somewhat less than the cultural experience that we thought it would be since we awoke this morning to having no power.  The time that we had spent shopping for groceries and plans to make breakfast in the tiny kitchenette in the motel room were all for nought.  We were, however, rewarded by a visit by a curious little fox who checked us out completely, including putting its paws up to the open rear of the car to check out the contents. 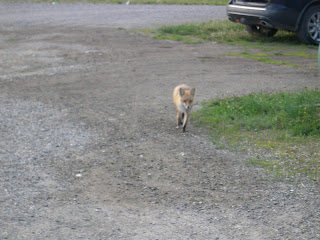 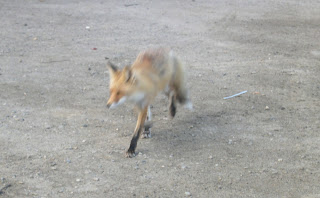 Since the nearest place that we could find a coffee was 110 km away, we packed up our bags and headed south, finally stopping in Carmacks for breakfast.

The trip back to Whitehorse was beautiful.  The Yukon is basically one mountain range after another..


Our tally of observed wildlife had not been too high.  We were somewhat disappointed with the Dempster Highway, especially since at the visitor centre, there were reports of sightings all along the Dempster of caribou, grizzly bear and mountain sheep, none of which we had seen.  In total at various times in the trip we had seen porcupine, one black bear, various little pika, a rabbit, two foxes on different occasions and one young moose seen when driving back from the canoe trip.  But the stretch from Carmacks to Whitehorse gave us a real treat.  Suddenly a lynx crossed the road in front of us.  It was quite close and its peaked ears were unmistakable.  It was impossible to get a picture in the time that we spotted it, but these creatures are hard to see and so the moment was special.

We arrived back in whitehorse around noon and stopped in to see the Canada Games Center -- a modern facility with pool, indoor running track and ice surfaces. 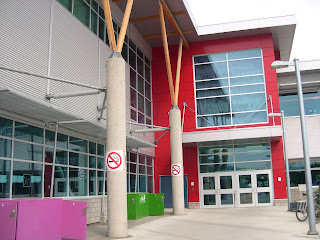 The afternoon had us watching the England-Italy soccer game and taking a walk to enjoy a few stores and see an Indian Cultural Center.  After a leisurely and wonderful dinner, we are enjoying a quiet evening before tomorrow's long journey home.  Here is the view from our hotel room. 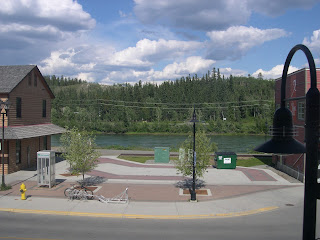 A few final thoughts...  the Canadian north has incredible potential.  The people take their time, but what needs to be done seems to get done.  There are many young people, including beautiful young women -- some here long term, some from Vancouver or elsewhere enjoying summer jobs.  Not so many families, but some indeed are present.  The proprietors of our hotel in Dawson were Swiss and had just spent their first winter in Canada running the inn.  Most everyone has a story.  Our canoe supplier, Colin, grew up in Toronto.  He just wanted to see what it's like 'at the end of the road'.  The most haunting image I had was of the prospector at the little camp we briefly visited en-route back from the canoe trip.  Tall and lean with long hair and a beard, he could have been straight out of the year 1898, like many prospectors before him, trying to make a big find.  The gold rush is no more, but the gold 'saunter' is still in progress.  Dawson city could still shine.  If our government spent just a fraction of the money it's spending on fighter jets, on northern development, what a difference it would make.  We'd like to return some day -- perhaps to see darkness at noon.

We like Dawson so much that we didn't want to get back to Whitehorse too quickly.  We thought of heading to Mayo but it turned out that this weekend they were having a Midnight Marathon in that mining city and we couldn't get accommodations.  They start the marathon at midnight, as the name suggests.  So today, being Saturday, we drove to Pelly Crossing where we are currently holed up in a little seedy motel before heading back to Whitehorse tomorrow.  I am rather reluctant to touch the sheets.  There is one station on TV that appears to be some kind of CBC from Newfoundland.  The show on arrival was about mummers in Newfoundland at Christmas time.  No, I had never heard of them either.. Nevertheless even here there is wireless!

But Dawson deserves more blog time before we say goodbye..  A couple of nights ago, we went to Diamond Tooth Gertie's for a show.  This is the only operating casino in the Yukon and we enjoyed a lively half-hour show of song and dance which was much appreciated by all, especially the men.  Here are a few photos. 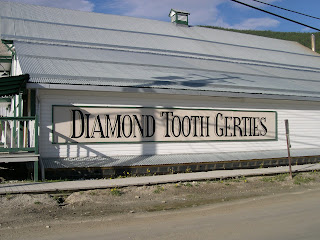 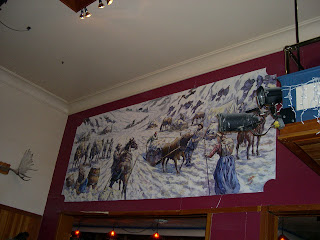 Obviously the above caption was written by Richard.
Actually, it was Richard's money that I lost.


This morning, I went shopping while Richard went out on his own with the camera.  Here are his photos and commentary: 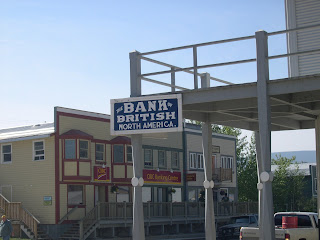 Posted by skylady at 9:21 PM No comments:

80 km by Canoe down the Yukon River

Our anniversary is June 25 and we always seem to be travelling at that time.  So we get each other a small gift as convenient around that date.  Richard bought me a necklace and earrings in Dawson City which contained mammoth ivory -- it amazes me that people are so casual about the many mammoth skeletons that are found in the permafrost around here -- but I digress.  I bought him a canoe trip down the Yukon River.  This means that I had to go too.

We had talked a few days ago to Colin, 'the' guy in Dawson who 'did' canoes.  He thought that we should canoe down the Yukon River to 40-mile creek.   In 100 times of sending people down the river, only once did anyone miss the stopping point.  Taking a look at the swift moving river filled with eddies, considering the logistics and possible nightmare of missing 40 mile creek where Colin was to pick us up gave us pause, and so Richard called him Thursday night to consider our options.  Perhaps canoeing down the smaller Klondike River *to* Dawson City in which case we would be unlikely to miss our destination, would be preferred?  After a few more words, Richard hung up and announced that the Yukon River to 40-mile creek it would be.  There would be another couple sharing the journey with us.  I must say that this did alleviate some worries but I stared at the ceiling for a while the night before imagining various scenarios none of them particularly good.

At 8:30 we showed up and were given a map (which was most useful) and each canoe got a GPS, one of which (the other canoe) worked.  The GPS proved to be most useful for determining the actual distance that we canoed -- in fact 40mile creek is as the crow (or raven, here) flies -- the actual distance was 48.5 miles, or about 78 km.  As we prepared to launch, my stomach was churning as much as the water! 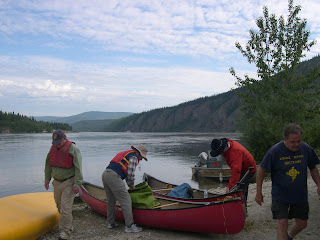 Our travelling companions were Karen and Lee, a physiotherapist and retired teacher from Wyoming.   They were perfect companions, smart, funny, able, and about the same age and speed! 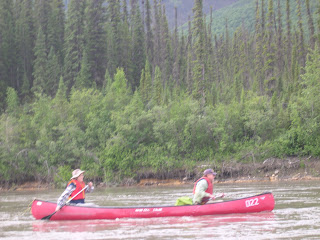 Here are some views from the early part of the trip. 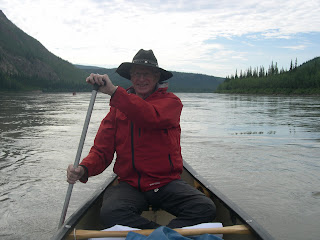 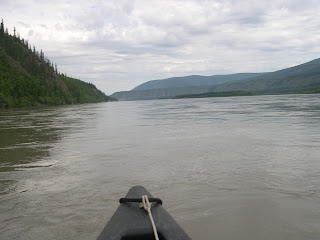 There was little white water on the trip.  Just near the shores and easily missed.  The main challenge fell to Richard who had to keep us from drifting sideways (or reversing) from the many eddies.  The first time we stopped, I didn't realize that we were *supposed* to turn backwards in order to come up to shore. 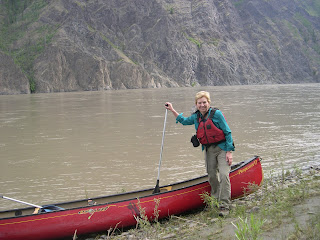 We carried on to our lunch break point. 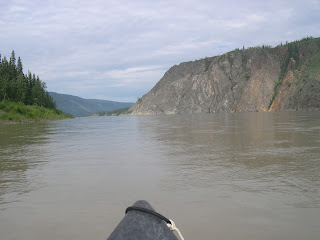 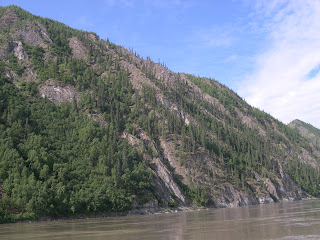 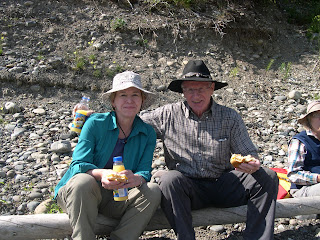 The hardest part of the journey was from lunch to Cassiar Creek -- our arms and shoulders were sore and we still had a long way to go. 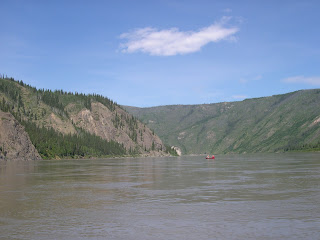 We passed several isolated forest fires -- a helicopter took off in front of us, presumably checking them out. 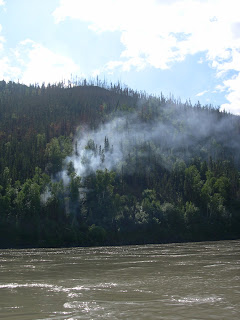 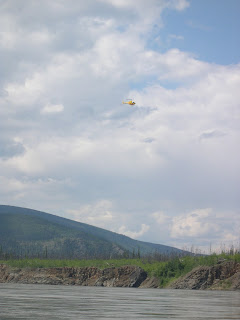 At Cassiar Creek, there were some cabins, one privately owned and locked, but others open and available for visitors to stay.  It contained bunk beds and a stove. 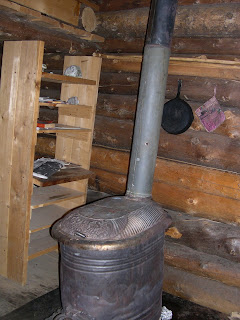 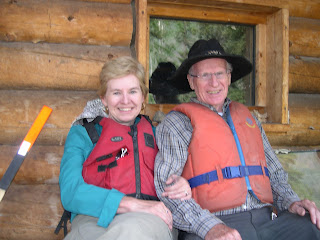 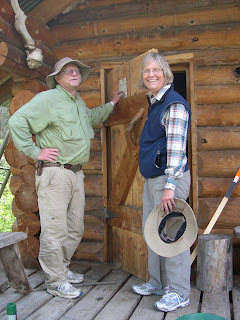 This is where the food would be put to keep it out of reach of bears. 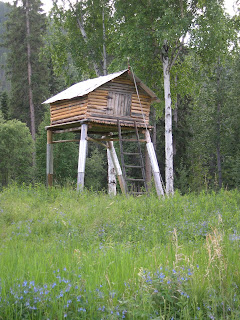 Here is Richard -- still trying to figure out how the gps worked. Fortunately, he understood maps. 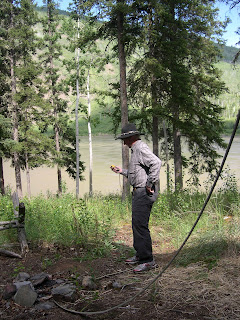 On the final stretch.. some snow still. 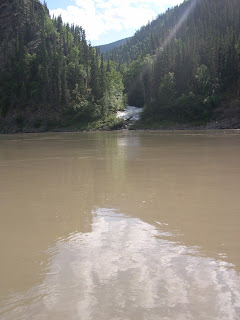 Made it -- 6:15 p.m.  I guess the river did most of the work, but we had put in a pretty good effort too!  Boy were we glad to see Colin at the appointed place. He brought along some cold beer for everyone. 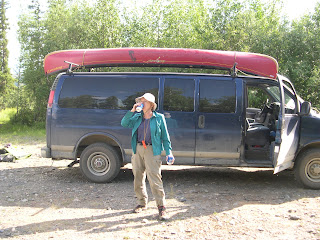 40-mile Creek was a 20-minute walk from the first site at which 'coarse gold' was discovered and ended up being the first settlement in the Yukon, circa 1886?  Fatigued, we took the walk while Colin meandered off to do some panning.  The mosquitos, tired muscles, and concern about bears ensured that we didn't stay long. 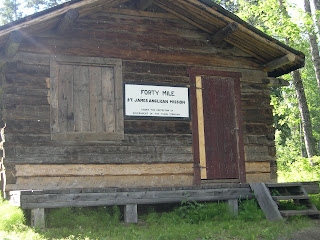 We didn't quite realize that it was a substantial journey back to Dawson City from the pick-up point that was on the wrong side of the river from Dawson.  It took us up to the 'Top of the World' highway which is the one that you can take from Dawson to Alaska.  En-route, Colin made a stop to deliver some rope to a small miner's camp.  This is what it looked like. 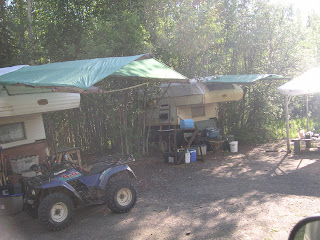 On the way back, Colin entertained us with stories.  It is amazing how resourceful the locals are.  We finally got the courage up to ask what happened to the one case in which the canoe-trippers missed the stopping point.  This was a British couple who continued on down the river, almost to Alaska.  They had one of those shiny space-blankets and a flint so could make a fire, but spent a rather scary night listening to the wolves howl and no doubt fending off mosquitos.  Colin had waited for a several hours and finally talked to a boater who apparently had seen them.  Eventually he contacted the natives in the areas who had been fishing salmon.  The next morning the salmon fishermen shared their catch with the Brits and brought them back to 40-mile Creek for Colin to take home.  In the car home, the woman turned to her husband and said, 'Perhaps we could take a tent along next time dear."  I was playing out how this scenario might have unfolded down south, with 911 calls and Search and Rescue involved.  Here, Search and Rescue is still available, but people are more likely to get by on their wits, their ability, their courage, and the help of each other. 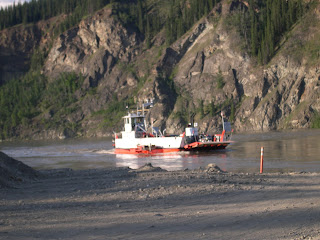